You can find everything here: nicely cooked meals, coal roasted dishes, Greek traditional kitchen, but also vegetarian food. The roasted meals are made by Mr Costa’s hands, while all the rest are nicely cooked by his wife Elisabeth: rabbit, oven cooked lamb, onion stew and many other tempting delights.
A breath away from Syntagma square, Staikopoulou street stands full of restaurants and bistros, to enjoy your food and desserts. My attention was caught by the oldest tavern in this way, called "Fanaria".

With the guide in my hands
Taking a leisurely walk to gather information, I chose at first not to sit inside, but to stand just opposite the famous tavern Fanaria. Observing the building and the movement outside, I was impressed when I saw several tourists seeking for a table, to hold a guidebook in their hands. I did not know -you see- that "Fanaria" was recommended by prestigious guide books, such as Fodor's, as one of the best places to eat excellent food in affordable prices in Nafplio.
Mr. Kostas, the owner, had the contact with foreign tourists for a really long time, after working as a waiter in the square. So, as he explained to me, when he opened the tavern, he began first working with foreign clients and then Greeks followed.

From coals to the tavern
30 years ago, when the tavern opened its doors, this wonderful old building housed a cafe and further back in the past, in the neighborhood "everything was stores for coals and the area was full of residents who then moved “to other  neighborhoods" as Mr. Kostas explained.

Under the shadow of tradition
The pale yellow building with the green doors of the tavern and the closed windows of the uninhabited upper floor, travels you mentally into the past. And while I want to go inside the tavern, my steps drive me on the side, the cobbled street with the cheerful pink bougainvillea, that smells tradition. Paved with round tables of ten, the alley houses host two wall paintings of the self-taught painter Katia Bandana picturing open doors with amberjacks wreaths.

With an artistic air
Inside the tavern, the tables put close to each other, create an intimate and friendly atmosphere. I stop to stare at a beautiful painting made by the painter Bobo, showing the tavern. One step more above, reveals another area of the tavern, smaller this time. With a few tables and theatrical atmosphere, with posters on the walls of the Amphi-theater Evangelatos, the-Art Theatre Karolos Koun, the National Theatre of Northern Greece and the Thessaly Theatre. "Is there a relationship between the owner Mr Kostas and the theater?" I wonder, to finally learn that here were loyal regulars many artists, actors, singers and other people of the arts and politics.

Mom’s handmade food
Let's move on to the main issue here, the food. Here you can taste everything: stews, barbecued dishes, traditional Greek cuisine and vegeterian food. The grilled meat is made from the hands of Mr. Kostas and all the other dishes are cooked by his wife, Mrs. Elizabeth. "Well then, what do you suggest for me?" I asked, to receive the answer: "Rabbit or lamb in the oven, with tomato sauce, with organic olive oil and spinach".
I penetrate subtly into Mrs. Elizabeth 's kingdom -the kitchen- to see the pans full of delights getting in minutes empty. Although it has now reached afternoon, the tables are full and the dishes come and go in the hands of the family 's son, Andreas.
If I want to describe Fanaria using a word, what would it be? Famous? No, "folk" Mr. Kostas corrects me. "The tavern is popular, and prices are friendly. Here, you can eat from 5 to 15 euros".

By always looking into the tiniest detail -which is what the word "pseiras" means in Greek- the Koutelias family has managed to create a unique tradition. In a warm, homely environment at...

This cozy tavern in the port of Nafplio is a small gem! It counts only a few months of operation in Bouboulina street, but has really a lot to tell... Introducing Mediterranean and Greek ...

In the cute "Panariti" village, just 10 km. away from Nafplio, a small, but famous among the locals tavern, a small "gem" with quality food is located just behind the Church, on the main ... 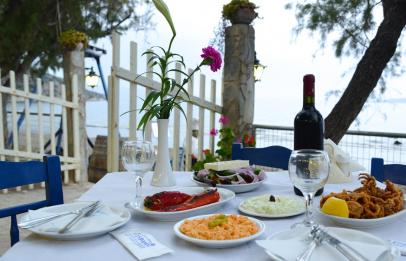 In a verdurous estate of 6,5 acres (9 strema) among “almyriki” trees, pines, mulberry trees and poplar-trees, expands the "Gefryraki" tavern; an incredible traditional tavern, right on th... 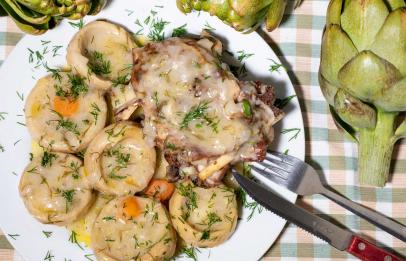 Just a few kilometers away from Nafplio in the beautiful village of Lefkakia you can find the incredible tavern Psalidas. Vicky is a well-known cook famous for her special dishes; all mad...